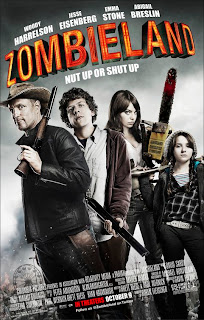 Much can be said about what makes Zombieland such a good movie. To put it quite simply, it's an ingenious and whimsical revival of a dying genre, made for our post modern generation. It also features the best cameo this side of Tropic Thunder. Most importantly however, it stars a maverick, trigger-happy Woody Harrelson who, if there ever was one, is a natural born zombie-killer.

Zombieland has a simple enough premise. The world (or USA, for it matters not) is over-run by zombies after humans are infected by a wild, human variation of the Mad Cow disease. Amidst this chaos, college nerd Columbus (Jesse Eisenberg), survivor of the initial infection, eventually encounters eccentric cowboy Tallahassee (Woody Harrelson). While travelling together, they meet sisters Wichita (Emma Stone) and Little Rock (Abigail Breslin). Together, they work on surviving the apocalypse as well as learning to trust each other while they make their way towards… an amusement park.

The one thing this movie could have done more with is zombies. For most of the second act, we see very few of the undead. By no means does the movie lose its pace or track, but given its title, you are made to wonder where the American populace, dead or otherwise, is. Thankfully, and clearly taking its cue from Shaun of the Dead while almost becoming its worthy successor, Zombieland teems with tongue-in-cheek humor and laces it with absurdist excesses (at least when offing zombies). There isn't much a director or script can get wrong when the setup requires the services of Woody Harrelson in such manic display. Tallahassee revels in his new-found talent of zombie-killing, and fortunately for Harrelson, director Rubin Fleischer presents him with ample opportunity to make the most of it, letting him choose the weapons to suit the killing. Columbus becomes his gutless sidekick while retaining the obligatory zombie movie role of the common man as apocalyptic survivor– he makes a list of rules essential to survive and then sticks by them. These rules, narrated in voice-over, become the basis of many laughs during the course of the film. Zombieland is primarily a comedy, but succeeds as both a romantic feature and a family movie (notwithstanding the level of gore). Emma Stone and Abigail Breslin, wielding shot-guns, provide the respective romantic and family angles.

With a sparse running time of 88-minutes, director Fleischer doesn't present his offering without any semblance of seriousness. Smartly paced and punctuated with quirky ideas and anecdotes, the movie draws out laughter and compels you to enjoy the fun and splatter unfolding on-screen. Owing to a vague opening and an ambiguous ending, Zombieland feels like the middle-chapter in an ongoing series of stories set within the same world – perhaps with the same people, or another bunch of survivors elsewhere. The endearing characters, without the imposed constraints of chronology, elevate Zombieland from being yet another zombie-movie comedy to what is a macabre, fun-filled experience at the cinemas, quite easily one of the year’s best.