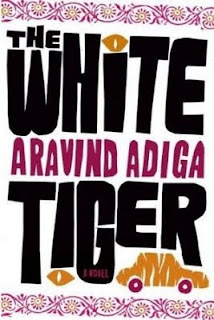 India, as depicted in fiction, is either the mystical land of snake charmers & magic or a poverty-ridden place with no hope for the downtrodden. The White Tiger by Arvind Adiga takes a different route - a man from the "darkness" (the rural inlands) rises to become an Entrepreneur in a major metropolitan. But don't let that premise lead you to think of this as a Rags-to-Riches story - The White Tiger is more about two Indias that co-exist in the same place. The poor India & the rich India.

An air-conditioned luxury 4WD on the roads of Delhi drive by paved roads. A few metres away is the pavement (footpath) where many poor people spend their nights - and most of the day too. Malls are populated with the "haves" while their drivers loiter around in the car-park awaiting a call to the Exit, too scared or just not permitted to enter the havens. Multi-storey buildings with penthouses have dark and damp mosquito-infested basements for the servants - like birds that ignore the dirtiness of their own birdcages, because they do not know any better. The White Tiger is an eye-opening account of a fictional poor-man who not only realizes he is poor, but notices the differences between himself and his master. But inbred habits don't let him break his shackles - bound by the tight-code of the servant.

Arvind Adiga writes the account in first-person and with a very humble English - one that would befit said man if he learned it late in his life. And through the words, the thoughts and the insights of "Munna", you realize what Society is like, agree with it and (in my case) accept it as the nature of things and carry on - not that anything can be done about it, but because we enjoy privileges that we don't want to lose. And also because, maybe, the birds don't want to fly free.